Book Review: Lina Sunseri, Being Again of One Mind: Oneida Women and the Struggle for Decolonization 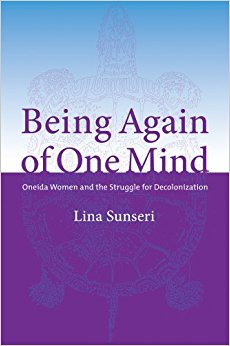 Share the post "Book Review: Lina Sunseri, Being Again of One Mind: Oneida Women and the Struggle for Decolonization"

Lina Sunseri’s book is about the decolonization movement of Oneida women native to Southern Ontario. In her book she challenges the mainstream understanding of nationalism and decolonization and gives a unique perspective from the Oneida. The significance of this line of inquiry and her authority over the issue comes from her own Oneida identity and experience. This is one of the core strengths of her work. The book is about the current process of decolonization in Canada from the perspective of gender, colonialism and nationalism and also specifically how gender relations within the Oneida have transformed through colonialism. Her research makes an argument for decolonizing nationalism to restore gender balance that existed before colonialism.

She conducted interviews of 20 women belonging to the Oneida of the Thames, which is one of the three communities that constitute the Oneida nation. Her discussions with the women in these interviews revolved around issues of “nation”, “decolonization”, “self-determination” and “self-government” and what meaning the women give to these terms in understanding membership of the Oneida nation. The interviews reveal the complex and sometimes contradictory challenges that exist in the women’s participation in the movement.

Sunseri calls it the “alterNative” analysis of the Oneida colonial experience. She points out that for far too long indigenous communities, and specifically the Oneida, have been represented by white, male researchers. The perspective presented in this book is about Oneida women from an Oneida woman’s point of view and she points out that her interviewees are her fellow collaborators rather than her research subjects, so the formation of the theoretical framework of the book itself is a collaborative work. Sunseri broadens the understanding of “nation” by drawing upon the specific understanding of the Oneida. Her objective is to understand these concepts from the Oneida point of view and not their mainstream Eurocentric understanding. The importance of nationalism as a tool for Oneida decolonization is a very important aspect of the arguments made in this book. It is not only her analysis that specifically takes into account Oneida women’s perspectives on nation, nationalism and decolonization but she points out that she followed a decolonized process in her analysis. Sunseri points out that the organization of the book itself was a collaborative process between herself and the women she interviewed. Dominant academic works often do not take into account the perspectives of marginalized groups such as Indigenous women. Sunseri’s approach of a collaborative, women-centric approach to exploring decolonization would seem like the most appropriate approach given that women, specifically Indigenous women, have been disproportionately affected by colonialism.

These disproportionate effects on women is an ongoing phenomenon which can be illustrated by the alarming number of disappeared and murdered indigenous women and the lack of action from the authorities regarding these cases in contemporary Canadian society. In many of these cases the authorities have ‘concluded’ that there was “no foul play” which the families of the women have strongly refuted. The responses from the authorities further illustrate Canada’s hands-off policy towards contemporary crimes against indigenous women and the reluctance to address historical and structural forms of violence and denial of the ongoing colonization of Indigenous people’s lands and lives and the tokenism offered through public apologies. In the light of this, Sunseri’s work is very valuable to help Indigenous people develop strategies for decolonization and for the state to rethink its reconciliation rhetoric. She defines decolonizing nationalist movements as:

… those aimed at forming new relationships that break away from colonialist structures of governance and that are rooted in notions of nationhood and sovereignty (Sunseri 2011, p.3).

Sunser also challenges the mainstream feminist understanding and critique of the notion of mothering as patriarchal and limiting women’s autonomy. She provides a different, broader and empowering understanding of mothering of the nation. The Oneida understanding of mothering is not limited to simply reproduction, but entails responsibilities beyond the domestic, and is seen as empowering with a decision-making role. Sunseri is critical of mainstream feminist explanation of “mothering the nation” and points out that in the Oneida context this is in fact an empowering notion as mothering does not constrain Indigenous women to domestic duties. Although she refutes mainstream and Eurocentric notions of nationalism and feminism, she also points out in her arguments that there are both progressive and reactionary elements in all forms of nationalisms and feminisms. Her main argument that comes out of the discussions is that Oneida women have always been at the forefront of the nationalist movement in an empowering role, but the process of colonization had a negative impact on their position and her scholarly work contributes to the decolonization movement that she is a part of as an activist and an academic.

Sunseri engages with and points out the limitations of postcolonial theorists Homi Bhabha, Stewart Hall, Edward Said, and, Franz Fanon. She uses their work as a point of departure in connecting colonialism to questions of nationalism, race, culture, identity, and hybridity, and takes it forward by showing the limitations in their work, particularly in representing colonized people simply as victims. For example, she points out that Said’s work essentializes both ways. She challenges Fanon’s work pointing out that it takes away agency of colonized subjects. She introduces Kiera Ladner, Taiaiake Alfred, Audra Simpson, and Dale Turner and shows how indigenous theorists address the issue of nationalism from different indigenous perspectives. However, her engagement and critique of these post-colonial theorists is not an exercise to demonstrate a limitation in their work but rather to illustrate a broader understanding of colonialism through colonial encounters and decolonization of specific kinds.

Some of the accusation of nationalism as a gendered notion may be applicable for nations who are colonials themselves for example in the case of the British and in fact can also be extended to post-colonial states such as Bangladesh and its treatment of its own Indigenous people, the Indigenous people of Canada, as well as other countries like the US and Australia where colonization is an ongoing process, Indigenous nationalism is itself a process of decolonization. Sunseri makes it very clear that she approaches the idea of nations and nationalisms from this specific Indigenous perspective.

Another important point that Sunseri brings up is the difference in understanding of the notion of sovereignty, which from the European perspective means the king’s authority to rule and from the aboriginal perspective is the rights and responsibility to take care of the land. In addition to this, nationalism needs to be understood in terms of the relationship of the state with the people.

Historically, not all people who came here to settle enjoyed the same sense of superiority, nor were they all equally positioned within the socio-economic structures of Canada (Sunseri 2011, p. 94).

The book challenges mainstream understanding of nations, nationalism and feminism. These concepts have developed their specific meaning from Eurocentric work and Sunseri does an important work in reclaiming these concepts and giving them meaning in a specific context.

Sunseri’s book was published in 2011 which was a turning point in the indigenous people’s movement in Bangladesh as following a report at the United Nations Permanent Forum on Indigenous Issues, the Government of Bangladesh declared that there were no Indigenous people in Bangladesh and the same year the 15th amendment of the national constitution also denied Indigenous Peoples claims to state recognition (CHT Commission 2011). Having been an ally in the Bangladeshi Indigenous people’s movement for many years my research looks at their movement seeking constitutional legal recognition in Bangladesh. The notion of indigeneity is of course very different in post-colonial nation-states in South Asia as both the states and the Indigenous nations are going through a process of decolonization and national identity formation is a process of decolonization politics. However, there are some parallels in the struggles related to obtain greater political autonomy and land, language, resource and cultural rights. While many scholars have written very critically about Jumma nationalism and its gendered aspects, Jumma nationalism has evolved in response to the Bengali majoritarian hegemony that not only recognized the Bengali identity as the only national identity but as a form of self-determination in response to state-led oppression, militarization, and violence against the Jumma people since the birth of Bangladesh. Jumma women have been part of the Jumma movement for self-determination and the birth and ongoing involvement of the Hill Women’s Federation with the Jumma movement for self-determination is an example of that.

Although the book does not really represent the Oneida Nation in full, and the Oneida of New York and Wisconsin may have different experiences based on US policies towards Native Americans and the specific type of colonization there, it illustrates very strongly the limitations and subjectivism of research findings based on the researcher’s positionality.

Share the post "Book Review: Lina Sunseri, Being Again of One Mind: Oneida Women and the Struggle for Decolonization"