Quota Reform: Beyond the Demands 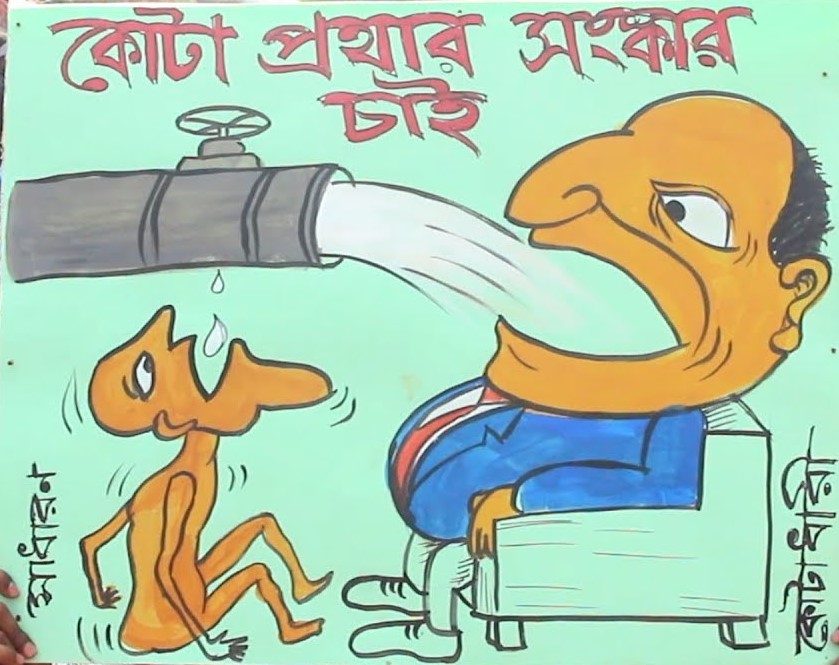 The suggestion of the parliamentary public administration standing committee members for a “logical reform” to the existing quota system in the civil service system should be considered as a positive step towards the resolution of the ongoing debate on the quota system. As we are aware, Prime Minister Sheikh Hasina’s proclamatory statement at the Parliament on April 11 that the quota system will be abolished did little to bring an end to this contentious matter. The students and job seekers who were demonstrating since February did not demand the abolition of the system. Yet, PM decided that abolition is the way forward.

While leaders of the movement accepted the PM’s announcement at face value and suspended the movement, subsequent events, particularly the actions of the law enforcing agencies and the Dhaka University (DU) authority, reignited the movement and expanded it beyond the confines of universities. It appears that there are people within the administration and diehard supporters of the ruling party who have decided not to accept the PM’s decision. People who otherwise lend unqualified support to the PM on all issues seem to have found ways to say that it’s not agreeable to them without imputing the PM for her action; they instead blame the students who raised the demands. They believe that the PM has acted in an impromptu manner to stop further deterioration of the situation. They are expecting that the PM will find ways to reverse her position and that the status quo will be maintained. Absence of a gazette notification to this effect bolstered their expectation. It will be interesting to see how they react to the parliamentary committee’s opinion. They are the ones who are suggesting that the PM’s speech was an emotive reaction rather than a policy decision.

The rationale for the demands of reform and events since April 8 is well-known and needs no recapitulation; suffice it to point out that the demands for reforms were never meant to be against the executive branch’s prerogative and the constitution’s commitment to affirmative actions for the disadvantaged segments of society; that it was never targeted against one category of the existing quota system; that the deplorable attack on the DU Vice Chancellor’s residence on April 9 has been used against the students before the investigation is completed; that police action, tantamount to abduction of three student leaders in broad daylight, was a violation of the law of the land; that the behaviour of the DU authorities, reflected in the series of actions such as expulsion of a leader of the student wing of the ruling party, expulsion of 24 other students, violating privacy of students and banishing at least three students from the student dormitory in the middle of the night, was appalling, to say the least. These events have taken place as a relentless campaign against the students in the social media and in the public sphere by the supporters of the government and has remained unabetted.

While the issue has remained unresolved, the quota reform movement in its wake has brought some questions to the fore and pointed to some uncomfortable facts which we can no longer avoid. The discussions on the demands have raised the fundamental issue of the state of Bangladesh’s economy—if the country is experiencing growth in GDP, then why is it failing to produce jobs which would encourage graduates to look for jobs in the private sector instead of battling for public-sector jobs? The unemployment data, provided by the Bangladesh Bureau of Statistics, is staggering: 48 million people do not have jobs; the official number of people looking for jobs in the past three months based on the ILO definition—2.68 million—is considered a serious undercount and remains deeply disturbing. Equally worrying is the number of unemployed among educated youth. In 2014, the Economist Intelligence Unit (EIU) reported that 47 percent of Bangladeshi graduates do not have a job; the situation appears to have further deteriorated. This larger economic issue and related matters of governance were not beyond our knowledge, but we hardly confronted them. It is one thing to explain the conundrum, the other is to address the issue. It is time to ask whether the repeated recitation of the mantra of “Bangladesh Paradox”—economic growth despite bad governance—without addressing the nuances has become the cheerleading song for legitimising authoritarian tendencies of the government and the perpetuation of non-inclusive governance.

The role of the universities, particularly of the administration and faculty of public universities, warrants our attention. The rhetoric of the VC and others of DU has laid bare how uber partisanship has undermined the core mission of a public university. For decades, the values of public universities have been eroding, but they have now hit rock bottom. Most of the faculty of DU acted with little regard for their role as the voice of conscience, but fortunately a small number came forward to demand some accountability of the administration. It is now evident that the universities are failing to be the citadel of dissension—for both students and faculty. The allegation that the student dormitories operate under the control of the ruling party student activists with the connivance of the administration is borne out by the statements of students who joined the movement and the actions of the administration on display since February 9. This is not a revelation but an affirmation of a reality that had long been ignored. This may provide a picture of a “peaceful campus” but is it consistent with the objective of an institution of higher learning?

There are some indications of things to come in the weeks ahead. Actions of both police against the leaders and the DU administration against the female students indicate that the government is relying on force to intimidate and create a sense of fear among students. It is very consistent with the government’s attitude towards any dissent and the dominant mode of governance over the past years. With apparent success in shrinking of space for opposition—both political and civil society—and limiting freedom of expression, the government might consider it as a winning strategy, particularly in the uncertain political environment in an election year. Understandably, the government may try to divide and dissipate the movement; delaying could be the tactics of the government to achieve the objective. I hope that it won’t be the case. Whatever is done will have lasting impacts on society and among the youth who constitute the majority of the population.

The incessant vilification of the movement and its leaders shows that there are people who do not want a peaceful resolution of the issue. Evidently, there are efforts to pit the families of freedom fighters against the movement activists. This may appear a politically expedient move, but certainly will sow the seeds of further polarisation of society and will be counterproductive in the long-term. A section of the opponents of this movement has quite deliberately used the term “Razakar” to describe the supporters of the movement. We have been witnessing the recurrent pattern of using it to demean and silence any disagreement with the ruling party. It is time to remember the abuse of the term only benefits those who should be rightfully identified as such for their roles in 1971.

What should then be the way forward? The parliamentary standing committee’s willingness to bring “logical reform” should allow the government to expedite formulating a clear guideline about the government proposal. Experts of public administration, former civil servants and the members of the civil society, can be consulted in this regard. The ruling party should send a clear signal to its supporters that they have the right to express their disagreement but use of freedom fighters’ families for petty interests is disrespectful to the freedom fighters. The prevailing situation at DU should be investigated; perhaps a citizens’ enquiry committee can be entrusted to do the job. After all, this is a public institution run by taxpayers’ money.