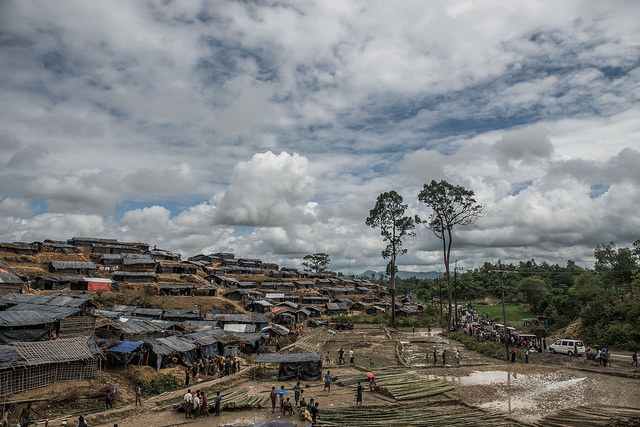 Bangladesh’s decision to respond to the ICC’s request regarding the Rohingya situation, particularly about the territorial jurisdiction of ICC, is a welcome development. It’s encouraging to see that Bangladesh, at least presently, is making a prudent move to consider options beyond the bilateral arrangement with Myanmar regarding repatriations of about 750,000 refugees. The futile policy of “putting all eggs in one basket” seems to have run its course with no visible results.

This decision coincides with the signing of MOUs between UN agencies and the Myanmar government. Understandably, signing of these MOUs didn’t come as an isolated act, but also with other indications of a new tact of the Myanmar government. These developments include a statement by the national security adviser U Thaung Tun that Myanmar is open to accepting all refugees, Aung San Suu Kyi’s meetings with military leaders, and high-level meetings between the Indian government and Myanmar in recent days. All these may provide an impression of a U-turn of the Myanmar government. It sounds like a new tune. But whether these are paving the road for refugee repatriation is an open question.

Myanmar’s new tune is hardly a result of a change of heart, for there have not been an acknowledgement of the heinous acts in Rakhine State since August 2017, which is tantamount to acts of genocide, or any discussion about the state policies of ethnic cleansing over the past decades that engendered the current situation. Thus, it begs the question, why did Naypyidaw even bother to show humility after its previous mood of blatantly ignoring the international community? Perhaps the road ahead, especially the likelihood of any acceptable solution to the crisis, can be assumed from the causes of, and conditions for, the rhetoric and actions of Myanmar.

Although the potential threat of a veto by China and/or Russia has kept the UNSC paralysed, there have been increasing efforts to put pressure on Myanmar by the international community for the past months. For example, early last month, the British envoy to the UNSC, Karen Pierce, said that if Myanmar fails to investigate the actions of its military, it will face the ICC referral. The prevalent mood seems to be keeping the possibility alive.

Beside the potential investigation by the Office of the Prosecutor (OTP) of the ICC, other avenues of punitive measures against Myanmar are also being explored. Some observers and policy analysts have brought up the concept of Responsibilities to Protect (R2P). The R2P framework, which allows the international community to intervene in case of serious human rights violations and war crimes, adopted at the 2005 UN World Summit, has become controversial in recent years after being allegedly abused by global powers. It also requires UNSC approval, therefore it remains a distant possibility.

But other similar steps are on the horizon. “The Protected Return to Protected Homeland” (PR2PH) plan, presented at the Berlin Conference on Myanmar Genocide in February this year by the members of global Rohingya community and their supporters, has gained traction (C R Abrar, The Daily Star, April 10, 2018). The proposed PR2PH plan requires setting a “safe zone” within a wide area of the country and deploying international forces to ensure safety of the inhabitants, including bringing the refugees back to the protected area.

The presence of the international community has been considered in the report of Rob Rae, Canadian Prime Minister Justin Trudeau’s Special Envoy to Myanmar. Rae has said that Myanmar can no longer enjoy impunity and recommended that “Canada should lead a discussion on the need to establish an international, impartial and independent mechanism (IIIM or “Triple I-M”) for potential crimes in Myanmar, such as was established by the UN General Assembly for Syria” (Rob Rae, “Tell them we’re human” What Canada and the world can do about the Rohingya crisis”, Global Affairs Canada, April 2018).

The chorus of imposing stricter embargo on Myanmar has grown louder in Europe which led to the EU’s restrictive measures on Myanmar, strengthening the EU’s arms embargo and targeting the Myanmar army and border guard police officials in April. There are two bills pending in the US Congress which demand that the US government takes further punitive measures. One of these bills, the Burma Human Rights and Freedom Act, will ban certain forms of military cooperation with the Myanmar military until the US State and Defense departments certify that officials have ended the violence.

Samantha Power, who served as the US ambassador to the UN between 2013 and 2017, said on June 9 that if the international community wants to change the cost-benefit calculus of the Myanmar government, it has to “change the incentives for them.” What Power was referring to is to target the sources of Myanmar’s revenue (Independent, June 9, 2018). That’s essentially targeting the flow of Foreign Direct Investments (FDI) and the Official Development Assistance (ODA). Rob Rae’s report also mentions the ODA issue. It is well recorded that in 2016, the largest ODA to Myanmar came from Japan (USD 507 million), followed by the United Kingdom (USD 144 mn) and the USA (USD 132 mn). These are being targeted as an instrument to put pressure on Myanmar.

These are, apparently, making Myanmar anxious and compelled to act fast. If Myanmar’s record is any indication, perhaps the Myanmar leadership is thinking that some symbolic steps and gestures will help them deflect these potential pressures. It may try to ride out the storm by adopting a delay tactic. Whether it will be able to do so depends on the resolve of the international community and Bangladesh’s diplomatic acumen.

Granted, diplomacy is not a linear path; it takes twists and turns. At times it requires course corrections. But repeated U-turns are less likely to produce the desired, let alone the best, outcome. Bangladesh has already made a few U-turns since the crisis began: from its initial offer of security cooperation with Myanmar to internationalisation of the crisis as reflected in Prime Minister Sheikh Hasina’s five-point proposal at the UNGA in September 2017, to a bilateral agreement to adopting a twin-track measure.

An impression that Bangladesh is a reluctant participant in the international efforts to compel Myanmar is detrimental to Bangladesh’s own interests. The response to the ICC should be followed up with working closer with the members of the international community who feel punitive measures against Myanmar should be mapped out, and pressure should be continued until the crisis is resolved instead of buying into Myanmar’s empty promises and signing a few MOUs.